Margaret is 72 years old and has osteoporosis like her mother. One morning while vacuuming the house she developed severe back pain. She struggled to move, stand and walk due to severe back pain. She saw her GP who initially diagnosed a back strain and prescribed strong pain killers. Unfortunately the analgesia made her feel generally unwell and constipated with little relief of her pain. Her only relief was on lying down. She also noticed that she was more bent forwards when trying to stand. Her friend had read an article in the newspaper about osteoporotic fractures in the spine and suggested she have an X-ray. Two weeks later an X-ray confirmed a compression fracture in her lower back. She saw a spine surgeon who recommended balloon kyphoplasty which she underwent a few days later. Within a few hours of waking up from the anaesthetic she was able to stand, with almost complete relief of her back pain. She also felt taller and straighter. She went home the same day and quickly returned to all activities and stopped analgesia. She went on to have a bone density scan and her anti-resorptive bone medications were adjusted.

With an estimated 1.4 million vertebral compression fractures (VCF) occurring worldwide each year 1, VCFs are the most common fracture caused by osteoporosis 2. The incidence of VCFs is higher than hip fractures and breast cancer combined. However, an estimated two-thirds of vertebral fractures do not come to clinical attention and under diagnosis and treatment of vertebral fractures is a worldwide problem. 2
Left untreated, VCFs are associated with an increased risk of future fractures, chronic pain, spinal deformity, and kyphosis; all of which can dramatically impact patients’ quality of life 3.
Traditional treatments for VCFs include bed rest, medication and back bracing. While these therapies may help to decrease back pain over time – as the fractures usually go on to heal over 3 months or longer – they do not treat the deformity related to the osteoporotic fractures. 4,5

There are a number of negative consequences of the fracture healing in a collapsed kyphotic position (Figure 1) which include: 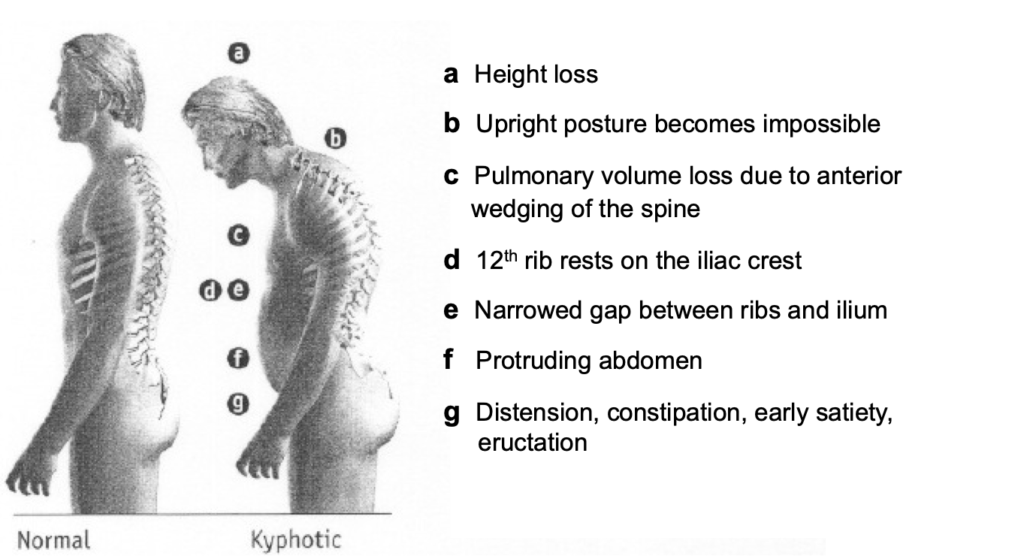 Open spinal surgery to correct spinal deformity either acutely following fracture or following fracture healing is fraught with risk in a frail elderly patient with an osteoporotic spine and generally only considered if neurological damage is present.

Balloon Kyphoplasty(BKP) is a simple percutaneous treatment, usually carried out under sedation or general anaesthetic, taking less than one hour. Needles are placed into the fractured vertebrae from behind and balloons inflated to restore the height of the vertebrae (Figure 2-3). 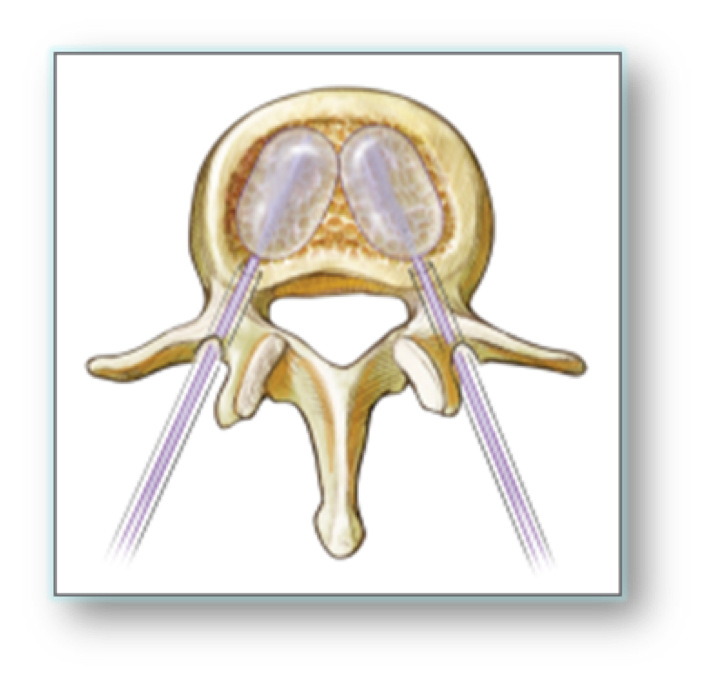 Figure 2. Balloons introduced percutaneously down the pedicles and inflated under the collapsed vertebral endplates. 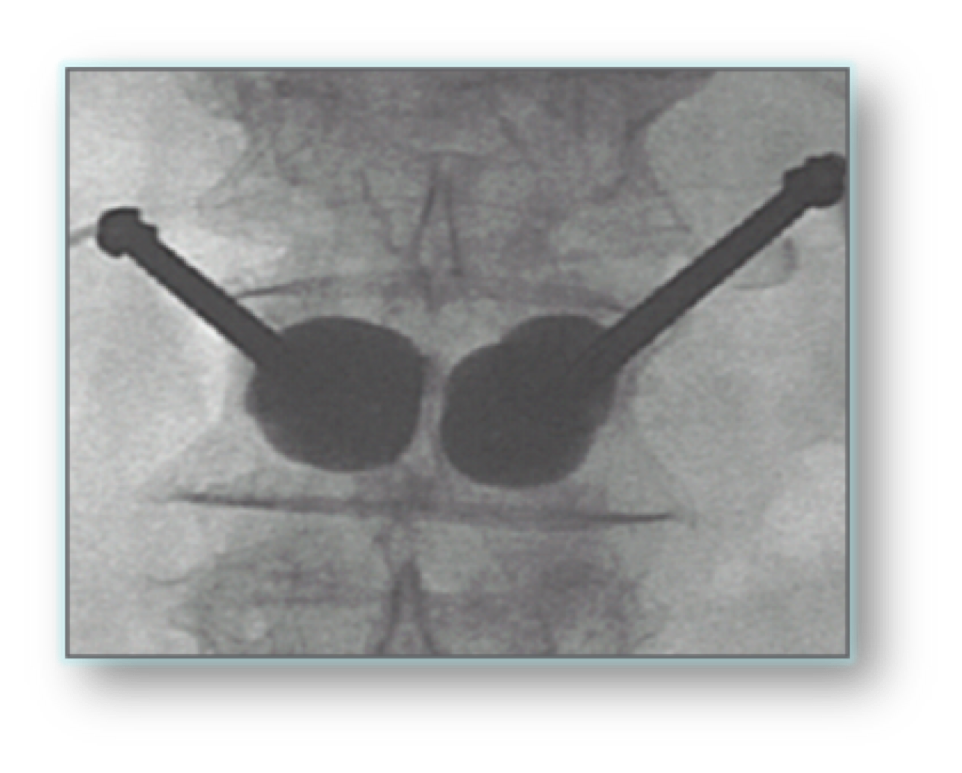 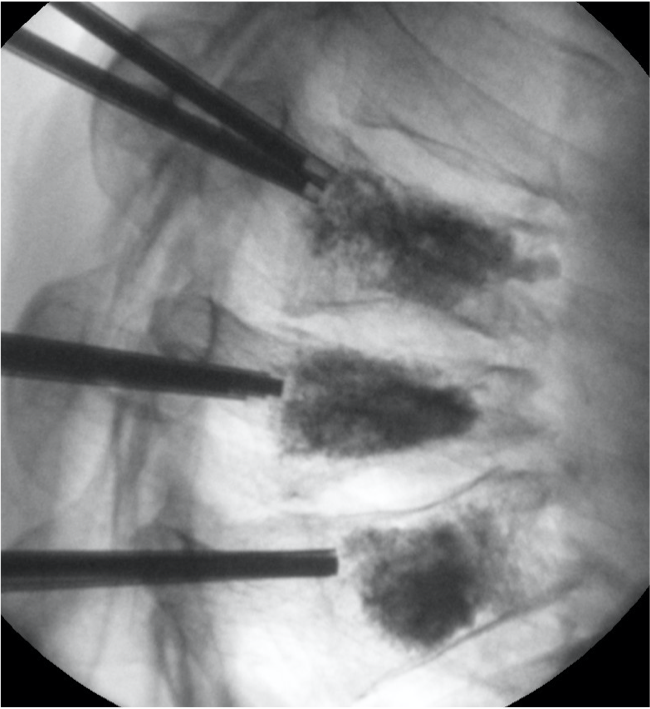 Patients are typically able to stand and walk within a few hours and the majority report immediate dramatic relief of back pain and feel taller and straighter (Figure 5). The risk of complications is very low. Patients can go home on the same day. 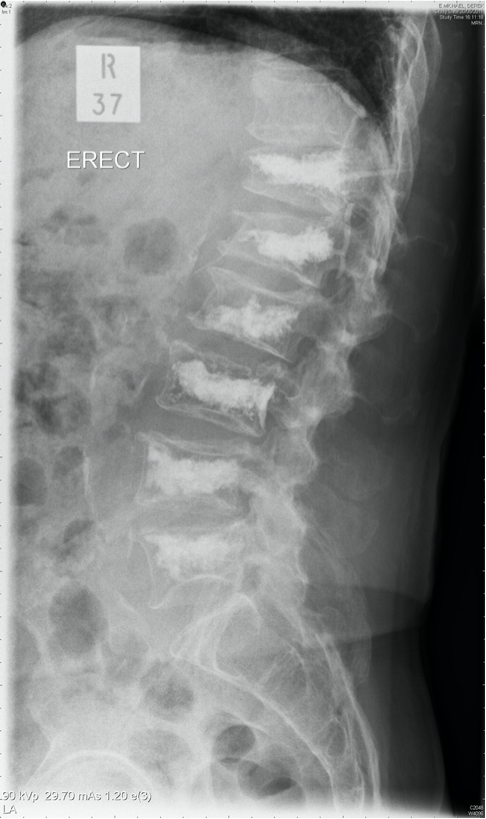 Controversy was raised back in 2009 when two clinical trials (Rachelle Buchbinder, Ph.D., et al and David F. Kallmes, M.D., et al) evaluated the clinical efficacy of the procedure Vertebroplasty, which is used to treat painful osteoporotic vertebral compression fractures. A randomised controlled trial published in the Lancet of 300 patients (Douglas Wardlaw., et al 2009) proved balloon kyphoplasty to be a safe and effective procedure. 6 In addition to this, Boonen S et al., 2011 proved it is superior to non-surgical management in restoring physical function and improving a patient’s quality of life. 7 In the FREE study 6 (The Lancet 2009, JBMR, 2011), Balloon Kyphoplasty has proven to be superior to non-surgical management in restoring physical function and improving patients’ quality of life at 1-year. These results are maintained over the 2-year follow-up. 7 (Figure 6) 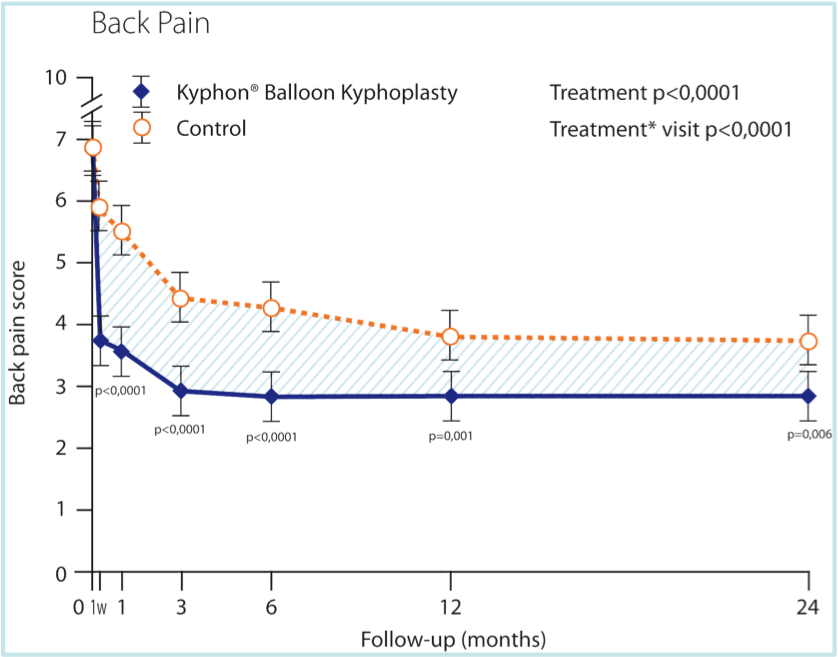 Figure 6. Immediate improvement in back pain maintained beyond two years and better than non-operated. FREE study 2009 6

A further analysis of the FREE study was published in the May 2014 edition of Spine journal. These results show that compared to non-surgical management, Balloon Kyphoplasty allowed for a correction of vertebral body kyphotic angulation by an average of 3.1° at 24 months next to improving disability, function, quality of life and pain averaged over 24 months. To date this is the first major randomised controlled trial for Balloon Kyphoplasty describing detailed radiographic outcomes and suggesting a link between clinical outcomes and radiographic results (kyphotic angulation correction).

A further recently published study, the SAVE study (JBMR, 2011) provides a comparison of mortality risks in the largest vertebral compression fracture (VCF) patient cohort examined to date (an analysis of 858,978 patients in the US Medicare database). Outcomes suggest that non-surgical management of VCFs has significant risks, is associated with poor outcomes and an 8-fold increase in mortality similar to the increase seen following hip fractures. 8 Thus early diagnosis and appropriate treatment is essential.

The National Institute for Health and Care Excellence(NICE) recognised the importance of treating painful vertebral compression fractures appropriately and reviewed the published literature concerning both Vertebroplasty and Balloon Kyphoplasty(BKP). Nine major randomised studies satisfied the inclusion criteria including a retrospective review of survival in nearly one million patients in the US Medicare system. In summary the evidence shows that back pain, function, and quality of life is improved following kyphoplasty with benefits over untreated patients maintained beyond 24 months. Studies have also shown that patients actively treated with Kyphoplasty have improved survival at 10 years than those untreated (Figure 7).

Kyphoplasty was also better than Vertebroplasty which is thought to reflect the benefits of kyphosis correction (only possible with BKP) with reduction of the negative consequences of hyperkyphosis (Figure 1) as discussed above. Balloon Kyphoplasty is recommended by NICE and is an advance in technology from Vertebroplasty.

NICE published guidance 279 in April 2013 stating that ‘Kyphoplasty and Vertebroplasty are cost effective use of NHS resources in individual with painful unhealed fracture’. NICE recommended Vertebroplasty and Kyphoplasty because they work better than other treatments available on the NHS. Although they also cost more than other treatments, this was justified by the benefits they provide.The details of this review can be found on the NICE website. http://www.nice.org.uk/guidance/ta279

NICE states that Percutaneous Vertebroplasty and BKP are recommended as options for treating osteoporotic vertebral compression fractures, in people:

Optimal timing of intervention was not addressed by this NICE guidance or subsequent update in 2016.

In practice this means any patient with severe back pain (Visual analogue scale >5/10) which is localised to the level of an acute or unhealed fracture as seen by oedema in the fracture on an MRI scan with a STIR sequence.

Some patients will improve quickly in the first few weeks following a VCF so an initial period of rest with analgesia is advised. Two weeks after the fracture is usually the earliest one would perform kyphoplasty if back pain remains significant. Kyphoplasty may not be an option after 3-4 months if the fracture has healed. Vertebral height restoration (kyphosis reduction) is harder to achieve after 3 months as the fracture may have ‘set’ (healed) in position. Persisting back pain after fracture healing is more related to the fixed kyphotic deformity, which leads to a stoop, and overuse of the posterior spinal muscles in an attempt to stand straight.

The key to our case study doing well was recognising that her back pain was caused by an osteoporotic fracture and seeing a Specialist who could discuss treatment options. Unfortunately too many patients present late, perhaps 4-6 months or longer following the fracture, which has now healed or set, and the window of opportunity for effective treatment has closed. The spinal deformity (hyperkyphosis) increases the risk that the individual will go on to have further spinal fractures, quality of life decreases, and mortality increases. For completeness patients should also go on to have a DEXA scan to formally measure bone density and quantify future fracture risk. Being on appropriate anti-resorptive medications to treat the whole skeleton reduces the future risk of hip, wrist and spinal fractures.

For more information go to the UK osteoporosis website or see a Spine Specialist who is experienced in performing Balloon Kyphoplasty.

Spinal fracture: causes, prevention and treatments
What exactly is a spinal fracture? A spinal fracture refers simply to a ‘broken bone ’in the back. We often
Read more
The Ageing Spine
The intervertebral discs are the cushions or shock absorbers between the bones of the spine. As children and young adults
Read more
Back Pain
Back pain is common, affects 25% of the population at any one time, 85% of us will experience back pain
Read more
Surgical management of a high grade Spondylolisthesis
A Spinal Surgeon will regularly see patients with a spondylolisthesis (vertebral slippage). Most commonly this is a degenerative spondylolisthesis occurring
Read more
Back pain relief: dos and don’ts
We all are prone to acute back pain at some point in our lives. Luckily, there are some ways to
Read more